NICOLA RAE : 5 sands, gravels and mud from the Thames 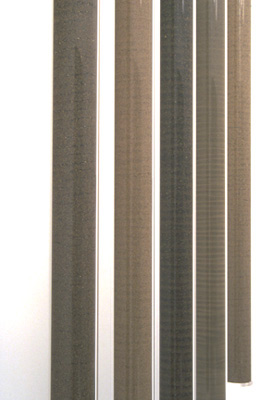 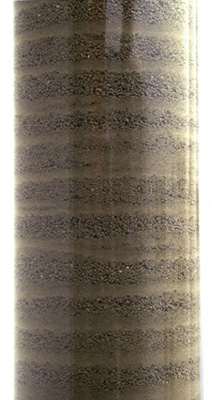 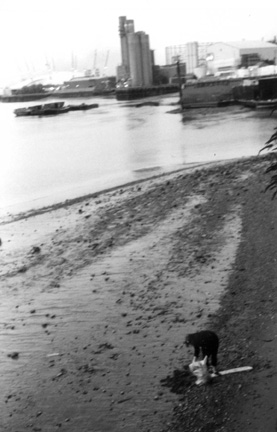 At Granite wharf, just below the familiar pale grey colour of Thames mud, the mud is thick, black and oily. However this dried to an interesting khaki green colour with little pieces of shiny solder visible in it - perhaps from boat building activities over many years in this area.

To the left of Enderby's Wharf the beach sand is very dark and granular. Maybe roof slates were unloaded from ships here, and broken slates were dropped onto the beach, gradually breaking up underfoot over many years.

To the right of Morden Wharf there is a beach of very pale sand. The north easterly winds must have blown this off the conveyor belt, which unloads sand daily from ships onto the working wharf to the north of this site, and also from the large piles of sand and aggregate stored beside the wharf. At North Greenwich beach, to the left of the Greenwich Yacht Club, the texture of the sand is more like a fine gravel. The sweep of the tide water coming around the peninsula has probably deposited larger particles of sand here. Although the largest proportion of it must have come from Priors gravel works to the West of here. Priors has particularly long conveyor belts which allow gravel to be delivered daily even at low tide - the strong westerly winds would certainly lift material from these structures into the river, to be shifted by the tides to form beaches.

At Nagasaki Walk, the sand is very similar to that of North Greenwich beach, but slightly less red and with a higher content of silt - it also has more white particles in it. There are jetties and conveyor belts in this area also - perhaps a slightly different aggregate is delivered here, or maybe the tides are simply moving the sand around in a different way as it is nearer the Thames Barrier. 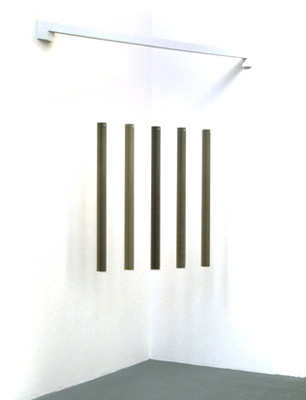 This cylinder work was originally made for an exhibition in Brussels in 2000 called 'Terre a Terre'. The five different sands, gravels and mud were dried, sieved and poured into specially fabricated Perspex cylinders. The cylinders were re-poured for 'Creek' in 2003 ( shown in photographs ) with clearer strata formations and a more invisible hanging system - making them more reminiscent of core samples. I also collected mud from the Creek by the Ha'penny Hatch bridge, to make this work more relevant for the 'Creek' exhibition. However after a week the high content of biological life it contained made it very noxious to deal with, and a large amount of worm-like creatures became visible as the mud dried out. After two weeks, a re-wetting led to mould growing and bubbling decomposition. The smell was very much worse by now and I have to admit that I put it all back in the Creek to recycle. Creek mud, as far as I'm concerned is best left in the Creek, to be enjoyed 'in situ'.